Chief Petty Officer Nathan Hardy was killed by small arms fire on February 4th, 2008 during combat operations. He was killed while trying to drag his friend and fellow SEAL, Chief Petty Officer Mike Koch of State College, PA, to safety. Both men died. Both men had served for over a year together in the SEALs. They were good friends; they worked out together, trained together, fought together and died together. They are buried side by side at Arlington National Cemetery. Nate left behind his wife Mindi and his seven month old son, Parker. 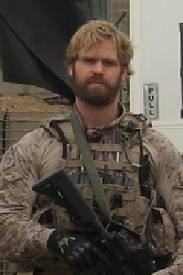